Around the small town of Odder, the manors are located very closely together in the landscape. There are both natural and historical explanations for this. The story dates back to the 17th century, when the five manors we know today were built. The fertile land of the Odder region, which formed a so-called hundred [Da: herred] by the name of Hads, was very important in terms of being able to establish so many estates in such a small area. But the many wars fought against Sweden were also a factor in the establishment of the manors in the region.

Gersdorffslund is one of several manor houses established in the area around Odder in the latter half of the 17th century. Photo: I / S Gammelgaard.

In the Middle Ages, there were several manors in Hads Herred owned by noble families. One of these manors was Aakjær, which was owned first by the noble Truidsen family and then by the Rostrups. In 1398, it was sold to the episcopate in Aarhus. Aakjær was run by the Bishop’s bailiff, who lived on the manor, and the manor became the centre of the Church’s property in Hads Hundred. A Danish hundred or ‘herred’ was an administrative division between parish and county, which was in use from the Middle Ages until 1919.

In the years that followed, the Church sought to consolidate more property in the area and gradually became the largest landowner in Hads Hundred. The Church amassed the land through acquisition, mortgage and gifts from landowners.

Hads Hundred as crown land
With the Reformation in 1536, the Church’s property was transferred to the Crown, which now became the country’s largest landowner. The Crown property was administered as a small fief by royal bailiffs. In the region of Odder, the administrative centre and the bailiff’s residence were at Aakjær Castle.

As the Church had previously done, the Crown strove to augment its possessions by bartering with the manor-owning nobility and by purchasing single copyhold farms. It was not only increased revenue from agriculture that mattered; the king’s hunting interests also played a role.

The wars with Sweden
On several occasions during the 16th and 17th centuries, Denmark was at war with Sweden. After the wars of 1657-1660, thanks to pressure from several European countries, peace was declared.

The peace had major consequences for Denmark, which was reduced by a third. It also meant that the Oresund was no longer a Danish domestic fairway. Denmark was forced to cede all of its possessions in the south of Sweden – Scania, Halland, Blekinge and Bornholm.

But the people of Bornholm had rebelled and liberated themselves from Swedish supremacy. So, when peace was declared in 1660, Bornholm once again became part of Denmark. The price was the handover of eight estates owned by Danish noblemen, which the King of Sweden wanted by way of compensation.

The noble families, who had to surrender their estates in the south of Sweden, were instead given royal estates in Denmark as compensation. This was of great importance for Hads Hundred and the area around Odder.

Hads Hundred in noble ownership
The major estate-owners in Sweden included the Danish nobleman and Prime Minister [Da: Rigshofmester], Joachim Gersdorff. Joachim Gersdorff was also the royal bailiff on the fiefdom of Bornholm. By way of compensation for the estate he had lost in Scania, he was given the Aakjær Castle with all the Crown lands and the island of Samsø. By way of compensation for the fiefdom on Bornholm, he was given the fiefdom of Kalundborg. Gersdorff already owned several estates in Jutland and on Zealand.

Aakjær Castle and Hads Hundred were now no longer owned by the Crown, but by a noble family. However, Joachim Gersdorff never managed to take possession of his properties. He died in 1661, so it was his heirs who were of crucial importance to Hads Hundred.

Nine children had to share the property between them. This hereditary sharing resulted in a major fragmentation of Joachim Gersdorff’s possessions. 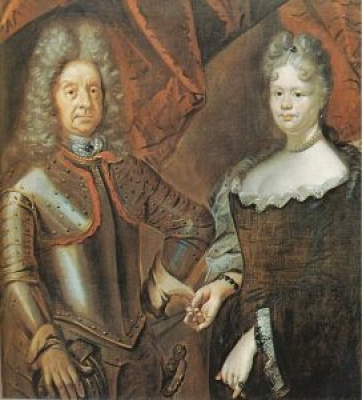 In the deeds, they all had the right to establish manor with the same rights and liberties as other existing manors. A manor is a large farm and the centre of an estate on which the owner usually lives. From the Middle Ages, these manors were always the preserve of the nobility.

But the king would not let go of the area completely. The title deeds for the Gersdorff family stipulated that the king still had the right to hunt, to a limited extent, on his previous possessions.

At the time, there were only very few independent farms in Hads Hundred: the vast majority of the land was laid out as copyhold farms under the aegis of Aakjær Castle. The following decades saw the establishment of five manors around the town of Odder: Aakjær, Rodstenseje, Rathlousdal, Gersdorffslund and Dybvad. 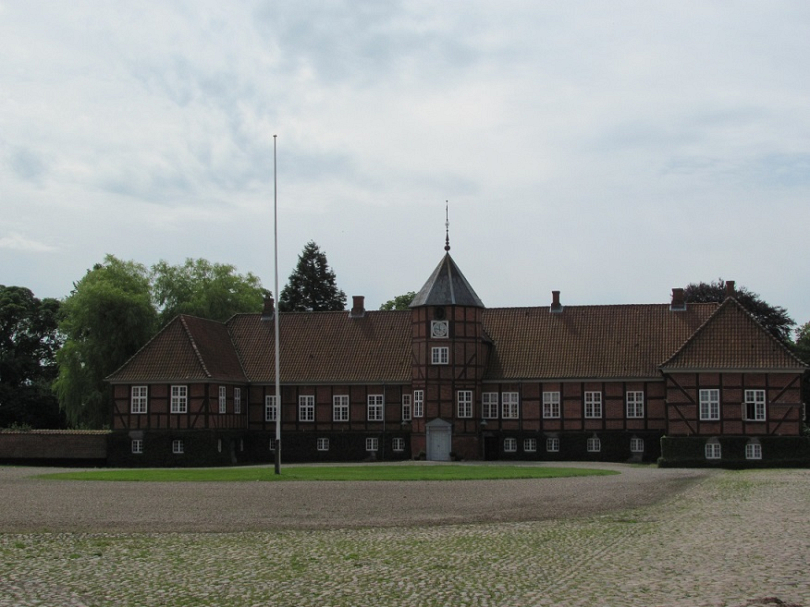 The main building of Rodstenseje still has its original appearance. It was built in 1681 under the ownership of Jens Rodstein. Photo: Preben Jensen.

The new manors
Margrethe Gersdorff was married to Gregorius Rathlou, who held the title of chamberlain [Da: kammerherre]. She inherited so much land, that she and her husband could establish an impressive two estates, named after themselves: Rathlousdal, where the village of Loverstrup was located; and Gersdorffslund, the location of Porsborg, one of the larger farms in the area. Sophie Amalie Gersdorff was married to Admiral Jens Rodsteen. They scrapped the village of Hovedstrup and established the manor of Rodsteenseje.

Frederik Gersdorff took over Aakjær itself and the larger farm of Dybvad, but only owned them for a few years. For a couple of years, his brother owned Aakjær, until it was again sold: this time to the nobleman, Otto Krabbe who was married to another of Joachim Gersdorff’s daughters, Dorthea Gersdorff. Magdalene Sybille Gersdorff, who was married to Jørgen Bielke, inherited the former fiefdom of Samsø, where Brattingsborg Manor was the family seat for a limited number of years. The estate was then sold off.

The Gersdorff family was a major fixture in the area around Odder. They traded and bartered with each other over the years. They also made sure to add more property to their possessions. For example, in 1674 Jens Rodsteen bought the small manor of Kanne at Hvilsted. Kanne was later renamed Rantzausgave and was located within the Hads Hundred.

The 1670s and 1680s witnessed major building projects in the area around Odder. New main buildings were constructed all over the place, and impressive home farms were built next to them. Dybvad’s main building was not changed, and Aakjær’s run-down castle continued to stand, though it was not occupied by the owner.

Of the new estates, the main building of Rodsteenseje is the only original one still in existence today. The other manors built new main buildings in the 18th and 19th centuries.

The advent of new owners was allegedly an upheaval for the tenants in Hads Hundred. Even though the Crown had had bailiffs in the region, the new owners were much closer to their peasants. The pressure of levies and work may have been substantially greater than before.

Dybvad was one of five home farms which were built in the decades after the transfer of Aakær County to Governor Joachim Gersdorffs after the Karl Gustav Wars (1657-1660). He died shortly thereafter, and it was not him, but his heirs, who set up the home farms of the region. Photo: Bent Olsen.

The manors as important cultural environments today
The 18th century saw the consolidation of the new estates around Odder and the distinctive manorial landscape we know today. The manors were located very closely to each other in Hads Hundred and were a dominant feature of the landscape with their main buildings and home farms, gardens, parks and avenues, and with the estate grounds, whose fields were located outside the village communities.

This landscape was created in the course of just a few decades in the latter half of the 17th century. Hads Hundred progressed from having a single large estate, Aakjær Castle, to having five estates, the majority of which were inhabited by the noble family of Gersdorff, or where the owners had married into other noble families.

The fact that there was a basis for so many estates in such a relatively small area also relates to the excellent, fertile soil in the area around Odder. In other parts of Denmark, the manors could be much more scattered. In Hads Hundred it was possible to establish a large estate on a relatively smaller area than, say, in west Jutland. The villages were also located closely together around Odder and, with a few exceptions, the peasants were all tenants on one of the new estates.

The manors still exist as large farms, and the historic buildings are visible, though different from one estate to another. In some places the old main building and parts of the home farm still exist. In other places, a newer main building can be seen. At Rathlousdal there are only limited relics of the main building.

Today, the manors are among the most important cultural heritage in the area around Odder. They represent visible evidence of an important chapter in our history, and their existence contributes to the story of a particular area, in which possession of land progressed from church land to Crown land to noblemen’s land.

The large amount of manors in the relatively small area around Odder still have significance for the local cultural environment, where the buildings of the manors are visible in the landscape. Photo: Ole Låsby.

The Brocks and Scheels of Gammel Estrup
Fussingø. Landed Estates, Enlightenment and Agrarian Reforms
Clausholm. The Judicial System and Estates
Brejninggaard. An Oasis in the Moorland Desert
Hald Castle 1536-1662
Herningsholm. The Manor on the Moors
Kabbel. The Wandborg Family at Kabbel in the 18th Century
Kalø. A Country House for Leisure and Recreation
Rosenholm. The Aristocracy after the Reformation
Kjeldgaard. Lord of the Manor
Silkeborg Manor
Sostrup. Magnificence and High-Status Lifestyle in the Country House
Nørre Vosborg. West Jutland's Manor
Lønborggaard. The Survivor