As the last great manor house built in west Jutland, Nørre Vosborg has been well known and much loved. Although, in production and financial terms, other manors were comparable or even larger, by virtue of its stately buildings and distinguished owners, Nørre Vosborg acquired a special status. This was to a great extent the achievement of the Tang family. The family’s heyday at Nørre Vosborg was in the 19th century, but during the long period of ownership from 1786 to 2004, each generation did its utmost to hold the estate together and guarantee its future. And they succeeded. 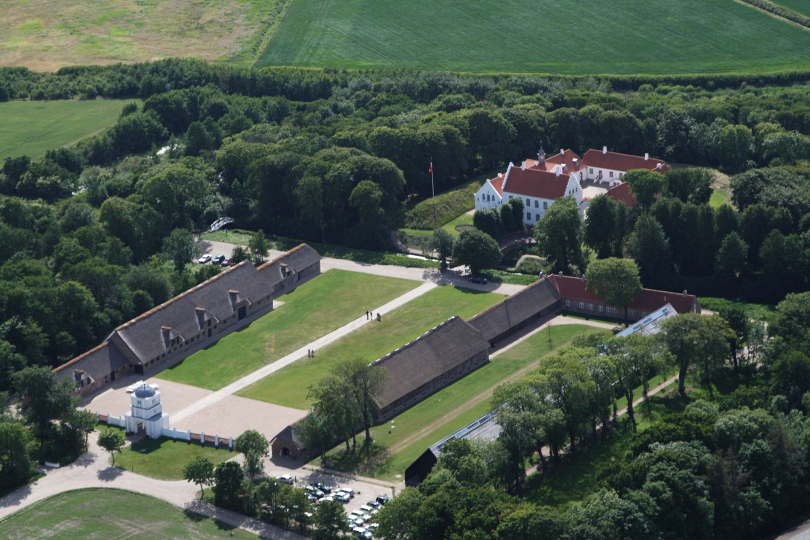 Nørre Vosborg in bird’s eye view, facing north-west. The restored manor opened in 2008 with a hotel and restaurant. The long wing with the bright roof behind the northern power hose is a brand new hotel wing. Photo: Lis Helles Olesen.

The owners, their houses and their estate
The account of Nørre Vosborg’s 700-year history has two common threads: the long line of owners from the 14th century to the present day; and the buildings and construction projects they carried out during their periods of ownership.

As far as most people are concerned, a manor is characterised by its historic buildings.  However, the essential basis for a manor’s survival was the estate’s lands: the land of the home farm and the copyhold farms. Today, this is an invisible part of the long history, but until the late 19th century, the farms were the decisive factors for Nørre Vosborg’s survival as an estate. 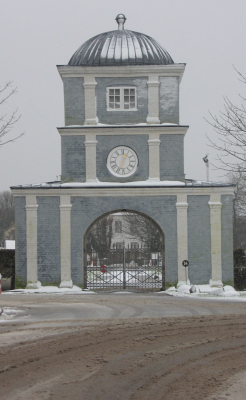 The Tang family’s arrival at Nørre Vosborg was spectacular in its own right. It is the story of Peder and Søren Tang, sons of tenant farmers, who bought the manor at auction in 1786. The story is no less remarkable because the two brothers had been born on one of Nørre Vosborg’s copyhold farms.

After a few years, Peder Tang became the sole owner. He was a wealthy, respected merchant in Ringkøbing, and his purchase of Nørre Vosborg was a highly visible step up the social ladder.

Peder Tang represented the start of an era. Taking care of Nørre Vosborg and keeping it in the family’s hands constituted a recurring theme for the more than 200 years that the family owned the manor.

The two first generations of the Tang family
Peder Tang was a sensible man who invested mainly in agriculture. His new home farm of 1788 bears witness to this. It was customised for horse breeding, which together with horse-trading was the manor’s principal business activity. He was also responsible for the distinctive gate tower and the refurbishment of the east wing in 1797.

His only son, Niels Kiær Tang and Niels’s wife, Marie Catharine Meinert, chose to live at Nørre Vosborg, where their five children were born. Marie’s diaries, which she kept for the 58 years she was lady of the manor at Nørre Vosborg, provide a unique insight into everyday life at the manor during that period.

She was widowed in 1814, and a few years later married Dean Koefoed in Ribe, who assumed the management of Nørre Vosborg. Shortly after his takeover, he began upon selling off copyholds and land, and his three stepsons initiated a rescue operation to keep the ancestral estate intact. 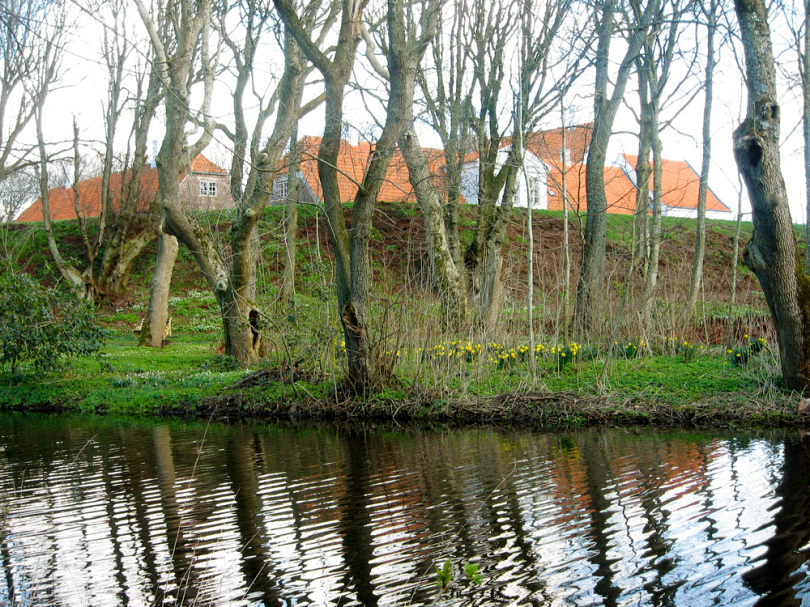 The moat, dikes and ramparts of Nørre Vosborg are from the 1570s when Predbjørn Gyldenstjerne established his new manor house at this place. Behind the tall rampart, the buildings were well protected from the rough wind and weather of West Jutland. As seen in the picture they still do. Originally, the area was unplanted, but today there is a lush and atmospheric, woody park. Facing north-east. Photo: Helle Henningsen.

State Councillor Tang at Nørre Vosborg
The youngest of the brothers, Andreas Evald Meinert Tang, took over the restoration and operation of the estate and, at the tender age of 22, he bought the estate and became sole owner of Nørre Vosborg. Andreas Tang was a very active, versatile and committed person who, as well as being an estate owner and businessman, also had a political career at both the regional and national level. In 1856 he was awarded the honorary title State Councillor [da: etatsråd].

Throughout his life, he devoted body and soul to improving the material conditions and education, of West Jutland’s peasants, and the general development of West Jultland’s agriculture was very close to his heart. The manor of Nørre Vosborg became a cultural centre in the region at the very heart of his active social and political life.

In 1838-39 he rebuilt the main building’s south wing for up-to-date accommodation for his growing family, which, in addition to his wife Marie Elise Fenger, also included his mother and, ultimately, six daughters.

Later, in the 1850s, Andreas Tang became fascinated by Neo-Gothic architecture. This was reflected in extensions to the old house and in new buildings. His plan was to give Nørre Vosborg a medieval feeling to emphasise the manor’s enduring, medieval roots. At the time, this was a necessary feature for a “real manor house” and became an important part of the State Councillor’s tale of Nørre Vosborg and his paternal grandfather’s acquisition of the estate. 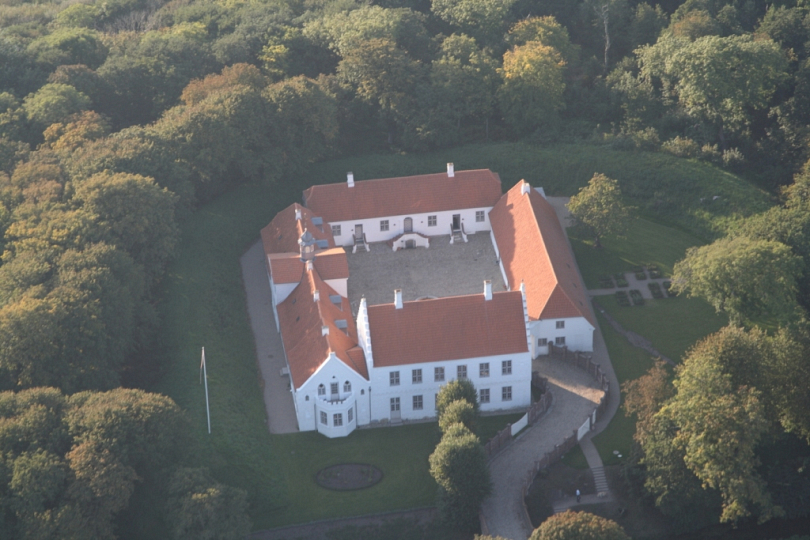 Nørre Vosborg’s main building in 2008 after the restoration, viewed obliquely to the west. The four wings of the main building are from four different centuries and together they reflect four different architectural styles, namely Renaissance, Baroque, Classicism and Gothic Revival. Photo: Lis Helles Olesen.

Quiet years and new initiatives
State Councillor Tang died in 1868. In 1877, having run the estate for a number of years, his widow transferred the estate to her eldest daughter, Christine Lorenze Tang and her husband, Henrik Stampe Valeur. He died in 1880.

Times changed after the death of Andreas Tang and Nørre Vosborg fell silent. Money was tight, and Christine Tang Valeur managed the estate to the best of her abilities. She protected the family’s old manor house and its history and over the years became the unifying force in the family.

Her closest advisor was Niels Villemoes at Skærum Mill. By 1905, the Mill, which had been Nørre Vosborg’s greatest asset for many years, was the last copyhold to be sold to the two enterprising brothers, Niels and Chresten Villemoes. They were both gifted entrepreneurs, and when Niels later became the sole owner, he turned the mill into an economic and cultural centre of the region.

The many generations of the Tang Family who resided at Nørre Vosborg all worked to keep the manor in the family’s possession. Often things almost went totally awry, but every time Nørre Vosborg was saved from extinction. Thanks to their efforts and Realdania Byg’s acquisition and sensitive restoration in 2004-2008, we can still enjoy this magnificent west Jutland manor house.

The Brocks and Scheels of Gammel Estrup
Fussingø. Landed Estates, Enlightenment and Agrarian Reforms
Clausholm. The Judicial System and Estates
Brejninggaard. An Oasis in the Moorland Desert
Hald Castle 1536-1662
Herningsholm. The Manor on the Moors
Kabbel. The Wandborg Family at Kabbel in the 18th Century
Kalø. A Country House for Leisure and Recreation
Rosenholm. The Aristocracy after the Reformation
Kjeldgaard. Lord of the Manor
Silkeborg Manor
Sostrup. Magnificence and High-Status Lifestyle in the Country House
Lønborggaard. The Survivor
Five Manors Around Odder