A 600-year Noble History: The Brocks and Scheels of Gammel Estrup

From the Middle Ages to the 20th century manor houses were ‘houses of power’ in the Danish landscape. At no point during that period was Gammel Estrup ever sold. Following the 600-year history of the noble families Brock and Scheel at Gammel Estrup provides us with a unique insight into the ups and downs of the the noble owners of one of Denmark’s largest manor houses: a manor house steeped in tradition. 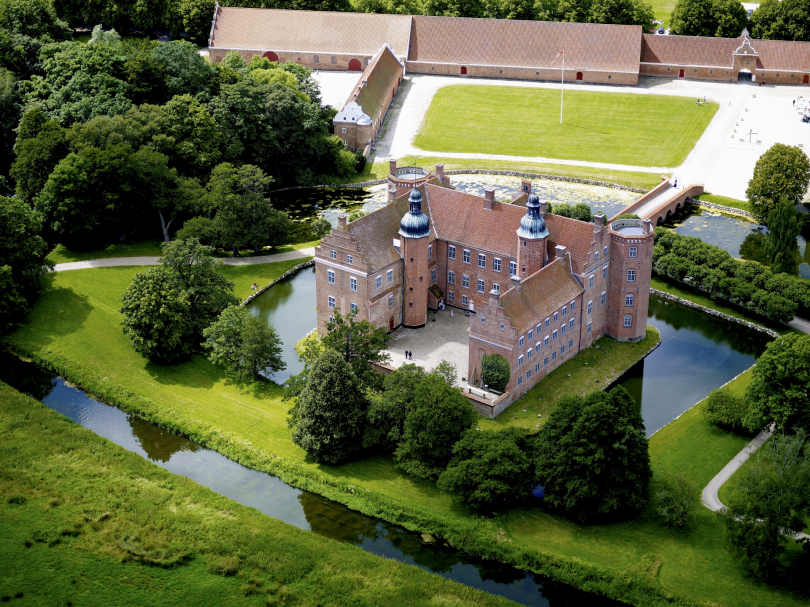 Gammel Estrup is located in a terrain that provides very a very good strategic position for dominating it’s surroundings. Around 1600, the castle, originally erected in the 15th century, was converted into a grand residence in Renaissance style. Photo: Hans Henrik Tholstrup.

The Brock Family
Even in the Middle Ages, Gammel Estrup, which was then known simply as ‘Esendorpe’, was the seat of some of the most important noblemen in Denmark. In 1340, Estrup was owned by Anders Jensen, who was married to Johanne Brock (died 1372). Their successors and family assumed her name. Subsequently, for almost 600 years, the manor house was passed on from one member of the family to another.

During the 15th century, members of the Brock family were some of the most prominent nobles in the kingdom. They were knights, squires and members of the Privy Council and, on more than one occasion, were involved in clashes and feuds with both peasants and other noblemen. The most famous encounter was Lave Brock’s prolonged feud with other nobles as well as the Bishop of Aarhus. Since the feuds more usually than not would turn violent, Lave Brock (died 1504) had the manor rebuilt and enlarged into a fortified castle. 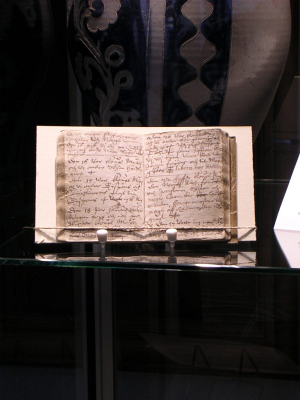 From the 1600s a number of diaries belonging to Eske Brock of Gammel Estrup have been kept. He used the diaries to keep track of his many travels, trading partners and other relationships. He also set a cross with up to four horizontal lines each time he had been at a drinking party to measure the ‘size’ of his drunkenness. Photo: Gammel Estrup – the Manor Museum.

Throughout the 16th century, Estrup belonged to the Brock family, though as a result of inheritance practice for long periods they shared the ownership with other noble families. Eske Brock (1560-1625) succeeded in consolidating the ownership of Gammel Estrup, during his lifetime becoming one of the wealthiest men in Denmark. He acquired a large number of country estates and as a councillor and royal bailiff at Dronningborg Len he was hugely influential.

During the period of his ownership, Gammel Estrup underwent comprehensive refurbishment. For example, the manor house acquired its present appearance with two corner towers and a driveway through the gateway in the west wing. Today, Eske Brock is not only remembered for his wealth, but also for his diaries, which provide us with unique insight into the everyday life of the nobility.

Dying in 1625 with no surviving sons, Eske Brock took his family name with him to the grave. It was his daughter, Jytte Brock (1595-1640), wife of the wealthy, powerful Jørgen Skeel (1578-1631), who inherited Gammel Estrup. Skeel rose to one of the highest offices in the country: Royal Marshall, commander-in-chief of the army.

Gammel Estrup was handed down to the couple’s son, Christen Skeel (1623-1688), with the nickname ‘The Wealthy One’. Not because he, in the spirit of the times, commissioned the construction of an alchemist’s laboratory, but because he continued to amass wealth and land for Gammel Estrup. When his son Jørgen Skeel (1656-1695) took over, Gammel Estrup had it’s largest estate ever. It was said that the squire of Gammel Estrup could ride halfway across Jutland on his own land. This may be something of an exaggeration, but as a testament to the vast number of estates he possessed he commissioned the eight magnificent tapestries, which depict all his manor houses. They were hung in the Great Hall, where they can still be seen today.

The next turning point was in 1725, when the family of Gammel Estrup could add the title of ‘Count’ to their name.  The counts seat became the manor house, Sostrup, which was then renamed ‘Scheel’.  Together with Gammel Estrup (entailed estate 1697) and the manor house of Ulstrup, it was the heart of what continued to be one of the largest estate complexes in Denmark.

The aristocratic lifestyle was particularly in evidence in the mid-18th century, during which Count Jørgen Scheel (1718-1786) was in control of Gammel Elstrup for 50 years. The high positions, to which he rose at court, demanded a flashy lifestyle and a level of consumption to match his high status. His father had established the French garden with its avenues of lime trees and orangeries. Jørgen Scheel continued to beautify the manor house and commissioned expensive decorative projects at Gammel Estrup. The other manor houses also acquired new main buildings or underwent extensive renovation.

Despite the fact that the late 18th century was a prosperous period, the vast estate of the Scheels was suffering financial difficulties, when at the tender age of 18, Jørgen Scheel (1768-1825) took over the reins from his grandfather. He continued the unbridled consumption and managed to exhaust the family’s huge fortune. This marked the swansong of Gammel Estrup’s role as centre of one the largest estates in Denmark. In 1815, Jørgen Scheel was declared bankrupt, but the appointed estate administrators managed to hold on to Gammel Estrup as an entailed estate for the family. 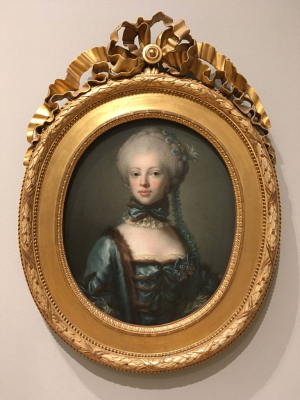 Eleonora Agnes Scheel, born Raben, married into the Scheel family in 1765. Later in life, she had to ward off an ever-increasing number of creditors, who came to Gammel Estrup and Ulstrup to charge the colossal debts her son, Jørgen Scheel, had amassed on his travels in Europe. Photo: Kasper Lynge Tipmark 2017.

Even after the loss of 2/3 of the estate, the Scheel family was able to maintain an elegant lifestyle at Gammel Estrup, and the manor continued throughout the 19th century to be an economic, social and cultural centre in East Jutland. The owners once again came to be seen in elite society in Copenhagen and around the manor houses in Denmark, but in 1926 it all came to an abrupt end.

Christen Scheel (1853-1926) became the last owner of the family at Gammel Estrup. After his death, the heirs gave up on the continuation of the century-old manor house. Estate lands were parcelled out and sold, furniture and possessions was sold off on auction. A few years later, in 1930, Gammel Estrup could open up as the first museum in Denmark dedicated to manor houses.

Gammel Estrup – the Manor Museum
It was expensive for the newly established Manor Museum to refurbish Gammel Estrup, and it took both money and persistent effort to get hold of the original furniture and fittings for the manor. But the project received huge support and, from the very outset, the Museum received many visitors.

Today there is still a Manor House Museum in the main building at Gammel Estrup, while the former home farm is home to The Green Museum for agriculture, forestry, hunt and food.

Gammel Estrup – the Manor Museum welcomes many visitors each year and works day in day out to convey information about all aspects of life in the Danish manor houses. The Danish Research Centre for Manorial Studies is also based in the main building.

The European Network for Country House and Estate Research (ENCOUNTER) was founded during the network’s first conference at Gammel Estrup in 2015. Photo: Gammel Estrup – The Manor Museum.

Fussingø. Landed Estates, Enlightenment and Agrarian Reforms
Clausholm. The Judicial System and the Estates
Brejninggaard. An Oasis in the Moorland Desert
Hald Castle 1536-1662
Herningsholm. The Manor on the Moors
Kabbel. The Wandborg Family at Kabbel in the 18th Century
Kalø. A Country House for Leisure and Recreation
Rosenholm. The Aristocracy after the Reformation
Kjeldgaard. Lord of the Manor - and the Life of the Peasants
Silkeborg Manor
Sostrup. Magnificence and High-Status Lifestyle in the Country House
Nørre Vosborg. West Jutland's Manor
Lønborggaard. The Survivor
Five Manors Around Odder