Herningsholm. The Manor on the Moors

In 1579, on the central Jutland moors, a new manor was built, which was different in many ways from other manors. Unlike eastern Denmark with its grain production, the moors of central Jutland were not suitable for this type of farming, but the changing owners of the manor still managed to exploit the landscape’s various resources. When it was constructed in the late sixteenth century, quite unusually for its time, Herningsholm was constructed like a fort, surrounded by large ramparts with bastions.

Idealised plan of the fortified Herningsholm, which was constructed by Josua von Qualen in 1579. Reproduced on the basis of Axel Steensberg’s drawing by Cecilia Garney.

Utilisation of the central Jutland moors
Today, at the northern end of the town of Herning, Herningsholm Manor is surrounded by an attractive park with trees and avenues. When the manor was built here in 1579, it was located in a landscape marked by meagre, sandy moorland.

The vast moorland areas did not provide good conditions for conventional grain production. Despite this, the various owners of Herningsholm each managed to exploit the central Jutland resources for other lucrative forms of agriculture. From the very beginning, the lush stretches of meadow around the manor were used for breeding bullocks, which were sold both in Denmark and abroad.

In the 17th century, they set about using the vast moors for sheep farming, which provided the tenant farmers with wool for knitting socks and other woollen goods. Finally, in the mid-18th century, they embarked upon cultivating the moorland for grassy fields, and the same period saw the construction of one of central Jutland’s first dairies at Herningsholm.

We do not know for sure why Josua von Qualen decided to fortify his new manor, but it was very unusual for the time. In the 16th century, Danish noblemen built manor houses in Renaissance style with turrets and spires as a show of splendour and wealth rather than for military defence. The fortress may have been part of an agreement with King Frederick II of Denmark, whom Josua von Qualen had served in the Seven Years’ War against Sweden from 1563 to 1570.

Herningsholm was placed on a clay mound on the banks of the River Råkkær alongside some of the best and most extensive meadowland in central Jutland. The fertile meadows were ideal for breeding bullocks. Josua von Qualen immediately set about getting involved in the lucrative cattle trade, which was an important source of income for the estate owners of the day.

In springtime, the bullocks, which were not sold on the spot to domestic and foreign buyers, were driven south on a network of roads, which today we know as Hærvejen, to the large cattle markets in Ribe, Kolding, Holstein and Hamburg. 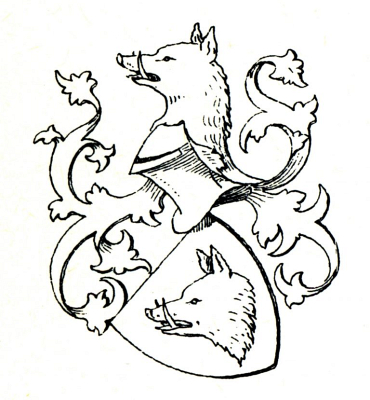 Picture of the von Qualen coat of arms with the head of a wild boar. Von Qualen was an ancient noble family, stemming from the eastern part of Holstein. In 1579 Joshua von Qualen settled in central Jutland and founded the manor Herningsholm. Figure: Danmarks Adels Aarbog and Dansk Adelsforening.

Textile production at Herningsholm
As early as the 17th century, Herningsholm took some of the first steps towards highly organised textile production, which was to become a feature of central Jutland in the following centuries. The landscape was dominated by moorland, which extended over large parts of the manor’s lands.

Herningsholm owned the main farm, Nygård, which had c. 4,000 acres [da: 3,000 tønder] of moorland . Herningsholm’s owner at the time, Christian Rantzau, could see great potential in using the moorland areas for sheep farming, so in 1638 established a sheep farm, which was given the name of Skåphus.

The wool from the sheep farm was divided among Herningsholm’s tenants, who knitted socks, mittens and other woollen garments. The manor was in charge of the sale and distribution of the finished knitted products.

The flock of sheep on the moors was constantly at risk from wolves. But the increased profitability of production enabled Christian Rantzau to employ a shepherd to keep the wolves at bay. Thereby, the lord of the manor acquired the necessary resources to establish and organise a new form of production on a scale never seen before in the region, and which had huge market potential.

Cultivation of the moorland
In the 18th century, hosiery production had become a permanent feature of the lives of Herningsholm’s tenants, and every year thousands of socks were made on the estate . The widespread hosiery production is also one of the explanations for the significant growth in population, which could be observed on the farms that were part of Skåphus.

But the evolution of the estate and the exploitation of the area’s resources did not come to a standstill, and from the mid-18th century new initiatives in the estate’s agricultural operations were once again apparent. The recently ennobled Hielmcrone family set about cultivating the hitherto unexploited moorland by burning off the heather, and then ploughing and liming the soil.

Parts of the cultivated areas were turned into pasture, which could then be used for dairy cows. This culminated in the establishment of one of the first dairies in central Jutland, which actually belonged to Herningsholm.

By the early 19th century, the lords of Herningsholm Manor had proved to be innovative entrepreneurs for over 200 years and they had, in various ways, sought to exploit the otherwise barren central Jutland moorland for profitable agricultural operations.

The Brocks and Scheels of Gammel Estrup
Fussingø. Landed Estates, Enlightenment and Agrarian Reforms
Clausholm. The Judicial System and the Estates
Brejninggaard. An Oasis in the Moorland Desert
Hald Castle 1536-1662
Kabbel. The Wandborg Family at Kabbel in the 18th Century
Kalø. A Country House for Leisure and Recreation
Rosenholm. The Aristocracy after the Reformation
Kjeldgaard. Lord of the Manor - and the Life of the Peasants
Silkeborg Manor
Sostrup. Magnificence and High-Status Lifestyle in the Country House
Nørre Vosborg. West Jutland's Manor
Lønborggaard. The Survivor
Five Manors Around Odder