A Country House for Leisure and Recreation. The Jenisch Family at Kalø 1825-1945

In the late 19th century, the owners of Kalø, the Jenisch family from Holstein, started to stay regularly and for longer periods of time in their Danish country house. Kalø Manor enjoyed a beautiful location on Kalø Cove near Rønde. They reared game for large-scale autumn hunts in the forests and, when Baron Jenisch married and had children, the family also started to spend their summer holidays at Kalø. The Jenisch family commissioned a number of buildings at Kalø, all of which featured the taste of the era for national and historic themes. 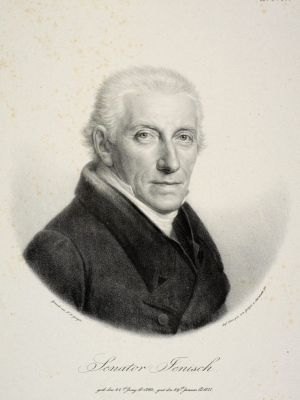 Martin Johan Jenisch (1760-1827) took over Kalø in 1825 after several unsuccessful attempts to sell the manor at auction. The manor house became a treasure to the Jenisch family, who retained it until the Second World War.

Kalø put up for auction in 1824
In September 1824, Kalø Manor was put up for auction. The agricultural crisis in Denmark had made a huge impact on the estate, and on several occasions the owner, Mette Leemeier, was forced to apply for deferment of outstanding tax arrears. Auctioning Kalø failed, but shortly afterwards an unexpected buyer appeared on the scene. The extremely wealthy merchant-cum-banker from Hamburg, Martin Johan Jenisch, bought Kalø for 80,000 Danish rigsdaler.

The purchase was unusual, and one wonders how a merchant from Hamburg could possibly be interested in owning an estate in Djursland. One possible explanation might be that, during the crisis of the previous years, the Danish King had borrowed money from Jenisch, and that the purchase of Kalø was part of a larger deal. After the sale, the state’s credit balance in missing tax payments from Kalø could cover a debt repayment to Jenisch, who thereby gained ownership of a Danish manor. 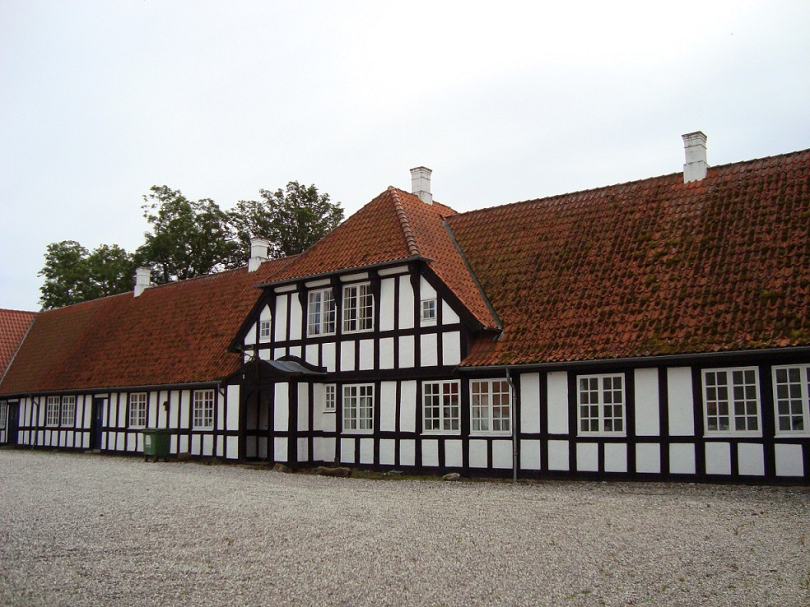 Kalø is built in half timber around 1710. The main building served as the manager’s home, but when the Holstein family came to visit during the summer holidays or autumn hunting, the manager had to move out. Photo Bent Olsen.

Kalø and the Jenisch Family
When Martin Johan Jenisch visited his newly acquired estate in 1825, Kalø consisted of the actual Kalø Manor with its home farm, 99 copyhold farms, Bregnet Church and Thorsager Church, two mills, two inns and a number of smallholdings.

However, Kalø was not intended to become a residence for the Jenisch family. Kalø was an investment, so it was run by a manager. Adolf Olsen, a 31-year-old farmer from Funen was hired for the job.

At the time of his death, Jenisch was the richest man in Hamburg, and his huge fortune was divided between two sons. The youngest son inherited the trading company, while the eldest son, who shared the name of Martin Johan Jenisch with his father, inherited the banking business. The latter also inherited Kalø, but we do not know if he ever paid it a visit.

He invested large parts of his inheritance into making his family estate owners in Holstein. In 1828, he purchased the Blumendorf estate, and in 1834 the neighbouring estate of Alfresenburg. During that same period, he built Jenisch Haus on the outskirts of Hamburg as a country house and summer residence for the family.

Martin Johan Jenisch married to Fanny Henriette, who ran the estates after his death. The marriage was childless, so a relative, Martin Johan Rücker Jenisch was made heir. He was the first person in the family to stay regularly at Kalø. 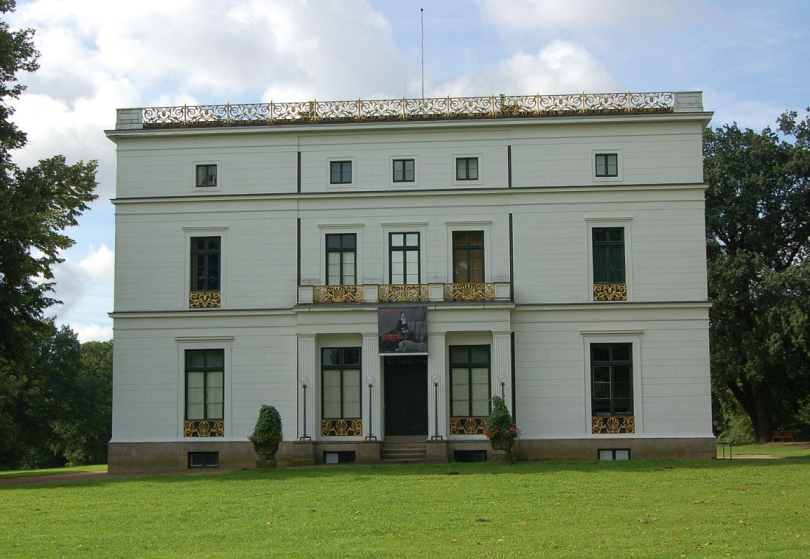 The Jenisch Haus in Hamburg was built in 1834 as a country house for the Jenisch family. The house was designed by the Prussian court architect Karl Schinkel. Photo: Mikael Frausing.

Kalø. A Country House for Leisure and Recreation
The previous owners in the Jenisch family had kept Kalø as a financial asset, but gradually the new owner developed an interest in hunting in the forests surrounding the manor. Hunting, in the sense of game hunting as a luxury rather than as a necessity, proliferated in the latter half of the 19th century as a recreational social activity within aristocratic and bourgeois circles. Hunting played a prominent role at many Danish manors between 1850 and 1930 and, clearly inspired by the United Kingdom, included fox hunting, deer stalking and the shooting of pheasants.

Martin Johan Rücker Jenisch was a man of the age, also investing money and energy in hunts on a grand scale. Both on his estate in Holstein, Blumendorf, which was now the family’s main seat, and at the somewhat smaller Kalø, operations were reorganised for the rearing and care of game, which could then provide a large yield of roe deer, hares and pheasants during the autumn hunting season. The entertaining and socialising grew to such extent that the old 18th-century house at Kalø no longer fitted the bill.

In 1898, he commissioned a new hunting lodge at Kalø (today referred to as ‘The Hunting Castle’), where he could reside with his guests during his visits. The lodge was designed by the well-known Danish architect Hack Kampman. Built in timber framing, the new house displayed a typical infatuation with Nordic and historical details. 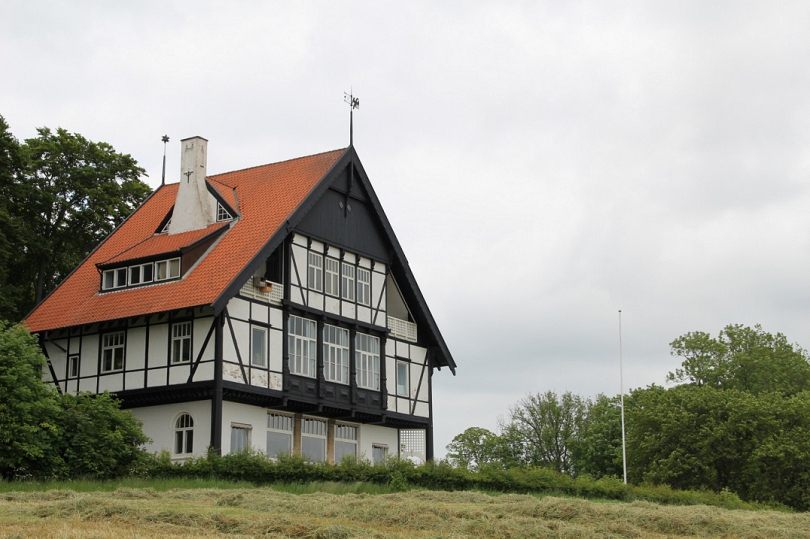 The hunting lodge at Kalø was built in 1898 after the family Jenisch began to stay longer at Kalø. Then it was no longer necessary that the manager moved out of the main building when the family came to visit. Today, the offices of the National Park Mols Bjerge occupies the house.

In 1905, Jenisch married Thyra von Grothe, and Kalø was clearly a cherished place, which he wished to share with his wife. He commissioned a small pavilion, ‘Thyrahytten’, which he presented to her on the couple’s first visit to Kalø. The following year, he was given the title of baron, and the couple from then on bore the name ‘von Jenisch’.

The family was augmented with five children and, following the end of the First World War, Kalø became a setting for protracted holidays during the summer. For the estate-owning family from Holstein, Kalø became a lovely summer residence, where the family could lead a comfortable, yet stately rural life. The holidays were devoted to recreation and experiences in this foreign land. The family received visitors from the surrounding estates and occasionally had guests from Germany as well. 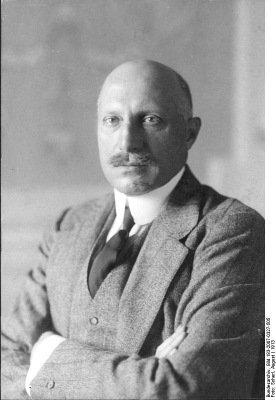 Martin von Jenisch obtained the title of baron in 1906. He was photographed in 1913 after he had resigned as a diplomat and retired to the Blumendorf estate in Holstein. Photo: Scherl.

The very last Jenisch at Kalø
In the course of the next twenty years, the Jenisch family spent their summers at Kalø. But the outbreak of the Second World War had huge consequences for the Jenisch family and their association with Kalø.

Two of the family’s three sons perished during the war as officers in the German army. The youngest son, Johan, was recalled from the Eastern Front and thereafter served in Silkeborg at the headquarters of the German military forces in Denmark. As the oldest surviving son in the Jenisch family, he had also inherited Kalø. Johan von Jenisch was present at Kalø in 1945, when a memorial was erected to his brother. It was to be his last visit to the country house.

Following the end of the war, Kalø was seized and confiscated by the Danish State as German-owned property. The conservation areas, which the Jenisch family had set up at the estate, were maintained, but the estate’s possessions passed to the Danish state.

The Brocks and Scheels of Gammel Estrup
Fussingø. Landed Estates, Enlightenment and Agrarian Reforms
Clausholm. The Judicial System and the Estates
Brejninggaard. An Oasis in the Moorland Desert
Hald Castle 1536-1662
Herningsholm. The Manor on the Moors
Kabbel. The Wandborg Family at Kabbel in the 18th Century
Rosenholm. The Aristocracy after the Reformation
Kjeldgaard. Lord of the Manor - and the Life of the Peasants
Silkeborg Manor
Sostrup. Magnificence and High-Status Lifestyle in the Country House
Nørre Vosborg. West Jutland's Manor
Lønborggaard. The Survivor
Five Manors Around Odder