Magnificence and High-Status Lifestyle in the Country House

By Signe Boeskov, The Danish Research Centre for Manorial Studies

Sostrup Manor is tied up with the story of the famous yet notorious Count Jørgen Scheel (1768-1825). His life story is a tale not only of the magnificent lifestyle and luxury consumption of the nobility of the time, but also of the early 19th century as a period of crisis for manors and country houses. Evidence of life at Sostrup in Count Scheel’s period reflects how the travels of, and networking among the nobility brought all sorts of news, knowledge and goods to the country houses and the local areas.

The manor was a powerful scene to express the certain lifestyle that was a hallmark of the European high nobility of the day. The great houses, the gardens and expansive forests and lands provided magnificient settings like no other place. They reminded the surroundings and probably also the families themselves of the special status they represented. Photo: Gammel Estrup – The Danish Manor & Estate Museum.

Sostrup Manor and Count Jørgen Scheel
In 1789, when the young nobleman, Jørgen Scheel assumed the role of Count and estate owner, from the family’s huge collection of manor houses he chose Sostrup in Djursland as his primary residence. His advent, accompanied by his wife, Christiane Mette Bille-Brahe led to a spectacular period at the country house.

The young Count and Countess fitted out their new home by the book. Accordingly, by all accounts, Sostrup created the ideal setting for the modern, aristocratic lifestyle of the time. The yellow room and the green room were designed for party and salon life, featuring debates, and artistic and musical performances. The large dining room and an impressive collection of china, glass and silverware formed the setting for large parties and dinners, for which excellent food, wine and imported specialities filled the tables. However, the décor of the more private rooms also testify to smaller parties and more informal get-togethers in accordance with the ideals of the time. Stately guest rooms were always ready to accommodate guests for days or weeks. Jørgen Scheel also surrounded himself with many personal possessions, which reflected appropriate interests for a young nobleman: books and periodicals, hunting gear and duelling pistols, scientific instruments, maps and globes, new contemporary inventions, art and exotic objects, advanced clockworks and mechanisms, and every conceivable type of musical instrument.

The couple lived well in the country house, but were also frequently in residence at their luxury home in Frederiksstaden (the district around Amalienborg), in Copenhagen close to the action, the court and the rest of the elite. Then came the grand journeys. At the age of  18 , Jørgen Scheel went on the mandatory grand tour, which provided young aristocrats with knowledge of European universities, cities and elite environments. The longest and greatest trip of his life lasted no less than six years, from 1795 to 1801. He visited several European countries, but the highlight was an extended stay in Naples, which, for better or worse, was a land of milk and honey and gathering point for the nobles, artists and pleasure-seekers of the day. From his travels, Count Scheel brought home great knowledge of contemporary trends, an abundance of acquaintances and countless things. 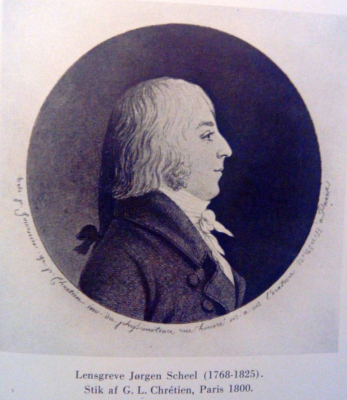 Crisis and bankruptcy
Like many members of his social class, on account of his upbringing, education and travels Jørgen Scheel had a well-developed nose for what was up to date and beautiful, which he combined with a worldly man’s generosity towards the people around him. He had less of a nose for estate management, agricultural development and the performance of duties and responsibilities, which many members of his social class also possessed. His luxurious lifestyle soon exceeded his income, and the Count took out one loan after another, until a completely unmanageable web of debts led to an extremely critical situation.

For many years, Jørgen Scheel’s life was characterised on one hand, by the serious financial problems and the scandals that accompanied them; on the other, by the perpetuation of his spectacular lifestyle – particularly during the great European trip, which he impulsively extended again and again. Even though the finances of the family and its estates were put under administration, and even though in 1807 Scheel resorted to the embarrassing solution of relinquishing his huge entailed estate in order to release funds that were tied up, bankruptcy was finally inevitable. The hopelessness was even further exacerbated by the fact that, in the wake of the Napoleonic Wars, Denmark was in a state of economic crisis, and the estates were going through hard times. Around 1815, a long, complicated process of investigation followed the scandalous bankruptcy. As for the Count, whose marriage was also dissolved in 1814, he lived his last ten years in his sister’s home with very few funds at his disposal.

So, from the very outset of Jørgen Scheel’s adulthood, debt, creditors and fear of disaster were constant companions. One scandal followed another, and it became increasingly clear that this could be the end of the greatness of the century-old noble Scheel family. Nonetheless, he never changed his ways. On the contrary, it would seem that upholding the standards of a count and the show of consumption remained an essential part of his lifestyle.

The manors and high-status consumption
At the end of the 18th century, when Jørgen Scheel became head of his branch of the family, it was regarded as one of the wealthiest and most influential noble families in Denmark holding a large number of estates. For generations, the family had held high profile offices at the court and maintained high status in elite circles.

However, maintaining status in Danish aristocratic circles was not only subject to the family’s formal circumstances such as offices, titles, descent and prosperity. It was also very closely associated with the lifestyle a family managed to display. Living like a count helped define Jørgen Scheel as a count. It communicated to the outside world that he was exactly that: a count. Thus, the skills that came with upbringing, education and moving in elite circles set the noble families apart and helped to define their unique lifestyle. The capacity to display appropriate moderation in certain contexts, and to consume the right composition of luxury items on a grand scale in other contexts was key. That the ability to finance the luxuries and the high-status lifestyle  was also essential goes without saying. But Jørgen Scheel’s example illustrates that the two things did not always go hand in hand.

For noble families, their manors and country houses were one of their most important and symbolic showcases. The families resided there for large parts of the year, but even when they were not in residence, ‘the house’ represented the legacy, the fortune and the very basis of their privileged status. The country house distinguished their owners from other elite groups of the time: for example, the burgeoning middle classes of the towns and cities. In the manors, they demonstrated their ability to design their homes, and to live and consume in a manner appropriate to their status.

The Brocks and Scheels of Gammel Estrup
Fussingø. Landed Estates, Enlightenment and Agrarian Reforms
Clausholm. The Judicial System and Estates
Brejninggaard. An Oasis in the Moorland Desert
Hald Castle 1536-1662
Herningsholm. The Manor on the Moors
Kabbel. The Wandborg Family at Kabbel in the 18th Century
Kalø. A Country House for Leisure and Recreation
Rosenholm. The Aristocracy after the Reformation
Kjeldgaard. Lord of the Manor
Silkeborg Manor
Nørre Vosborg. West Jutland's Manor
Lønborggaard. The Survivor
Five Manors Around Odder