Silkeborg Manor was established in 1767, but did not achieve a lasting, stable position as a local manor. There was no noble family, whose wealth and tradition could invest the local area with glory. On the contrary, Silkeborg Manor tells a story of dubious investments, dashed hopes, bankruptcy, government takeover and integration into modern forestry, manufacturing communities and urban life. The history of Silkeborg Manor can be divided into themes based on the aims of the changing owners for the manor: in terms of farming, forestry, becoming part of a manufacturing community and then part of the urban community of Silkeborg. 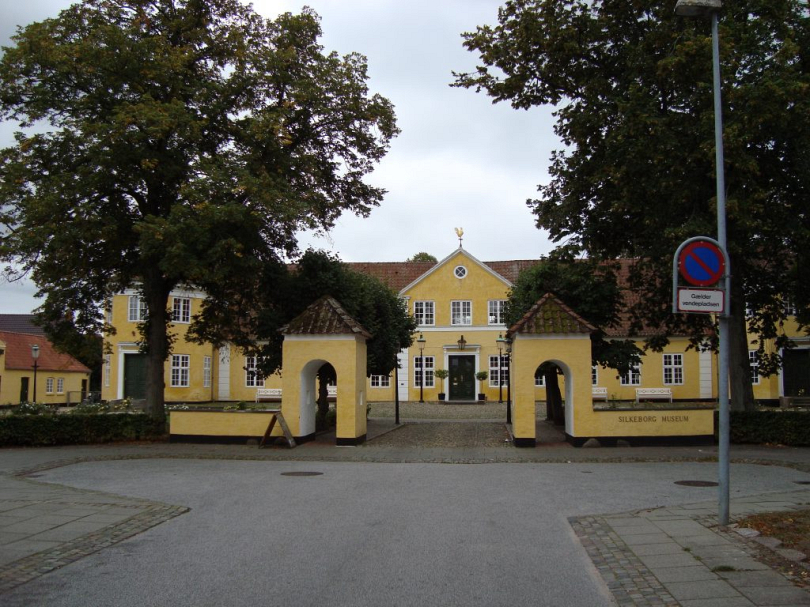 Silkeborg Manors main building was erected by Hans Nicolaj Hoff, after he had a bought a large parcel of the Skanderborg Cavalry District at an auction in 1767. Photo: Bent Olsen.

Silkeborg Manor privately owned 1767
In 1767, the Crown auctioned a number of cavalry districts. On this occasion, the cavalry major, Hans Nicolaj Hoff (1722-1806) bought the area at Silkeborg. The estate held a large home farm  and  substantial Church tithes. The property had about 6,500 acres of forestland, a mill, two tile works and extensive fishing rights in the River Gudenåen and the surrounding lakes. Silkeborg Manor had 77 copyhold farms and 32 houses.

Immediately after 1767, Hans Nic. Hoff had a main brick building and timber-framed barns built at Silkeborg Manor. The barns burned down in 1777 and were rebuilt in brick.

Pøtsø, as shown in the aerial, is just one of the many lakes in the large woods surrounding Silkeborg. Photo: Wikimedia Commons.

The Hoff family owned Silkeborg Manor for nearly 40 years:  first, Hans Nicolaj Hoff, and then his son, Henrik Muhle Hoff (1763-1817) from 1794 to 1804. For the Hoff family, Silkeborg Manor was an investment. The father and son were both excellent examples of the middle-class entrepreneurs of the time. Farming was rationalised, things were restructured, new land was incorporated, secondary estate farms were established and copyhold farms  were sold off. The estate’s extensive moorland and meadowland areas made both sheep farming and bullock fattening a major part of the agricultural operations.

In addition but to a lesser extent, the Hoff family were involved in forestry, but the transport routes were an obstacle, so the timber was sold and used locally: for example, for the extensive manufacture of clogs. In 1804, Henrik Muhle Hoff sold Silkeborg Manor to H.P. Ingerslev and the cavalry major, Halling. This was the start of a new era at Silkeborg Manor.

H.P. Ingerslev was mainly interested in Silkeborg Manor on account of the Silkeborg forests. His wish was undoubtedly to clear Silkeborg’s forestland and then parcel out and sell the land. The Forestry Act of 1805 put a decided stop to such plans, and H.P. Ingerslev then turned his attention to modern, rational forest management. This strategy depended on a regulation of the River Gudenåen, so the timber could be transported to the town of Randers on barges.

Up until the early 19th century, the Silkeborg forests were relatively protected, because poor roads made it impossible to export large quantities of timber to the market towns of East Jutland. However, between 1806 and 1809, H.P. Ingerslev succeeded in making the River Gudenåen barge-friendly. The Crown lent H.P. Ingerslev a fortune towards the realisation of this project.

New initiatives – trading post and paper factory
Between 1823 and 1837, the state undertook a thorough evaluation of Silkeborg Manor and decided that the forests around Silkeborg should be protected for posterity. A resolution of 29 August 1837 declared the forests of Silkeborg a royal domain. Silkeborg Forest District established its headquarters on the estate farms of Naaege and then in Marienlund (today Gl. Skovridergaard).

But what about the other part of Silkeborg Manor with its main building, farm buildings and farmland? The decision was announced in the royal resolution of 7 February 1840. The state decided to turn this part too into a royal domain with a view to new, comprehensive initiatives involving factory operations and the establishment of a trading post. 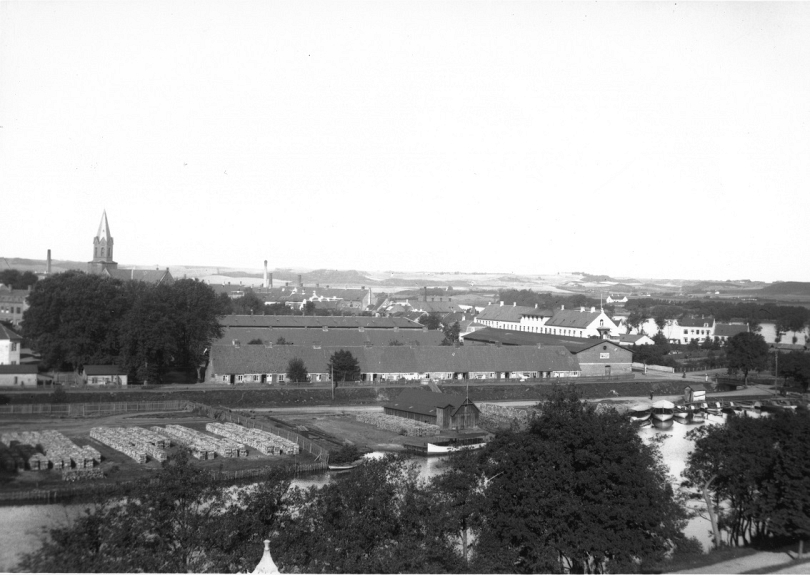 When Silkeborg Paper Factory was built in the 1840’s, the former farm buildings of the manor was made into dwellings for factory workers. Photo: Silkeborg Museum.

From the 1770s, the estate’s main building and farm buildings were located between the future factory community and the town to-be. The factory-owner, Michael Drewsen established his interim headquarters in the main building between 1844 and 1847, but had no plans to remain living there. On the other hand, the factory community could use the former farm buildings, the east and west wings, to house workers.

The Silkeborg Paper Factory had 29 flats constructed in the two wings. The working community in the two wings survived for just over 60 years until, in the years following World War I, the stables were demolished to make room for a new, mixed residential district. 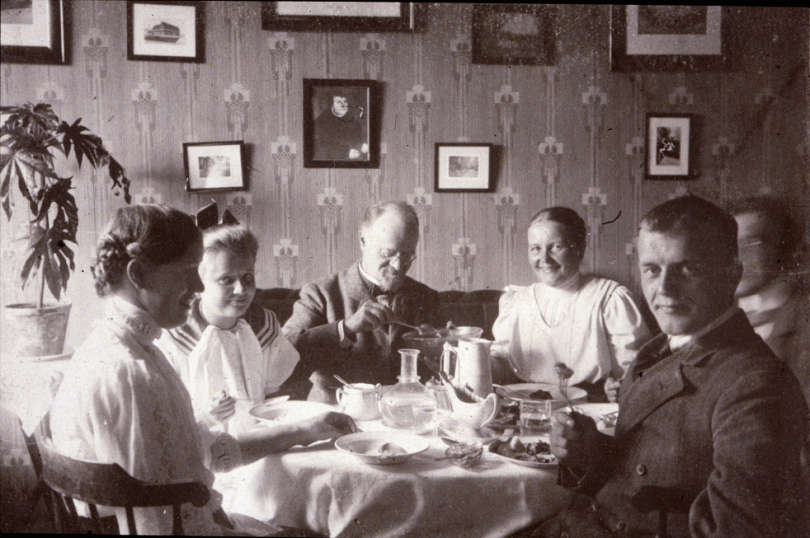 The Jessen family, who owned and lived at Silkeborg manor 1911-1938, is seen in the photo having Sunday luncheon. Photo: Museum Silkeborg.

The Jessen Family
The merchant, Peter Jessen bought Silkeborg Manor in 1911, which in the previous decades had been inhabited by some of the city’s wealthy families. Peter Jessen was a successful businessman, but his purchase of the estate was not an investment as such. The old manor house was intended as a suitable family home.

The Jessen family lived on the estate for 27 years. That means the family lived in the property longer than any other in the manor’s existence. During World War I, they converted the west wing into a retirement flat for Peter Jessen’s parents. When the parents died, the flat was taken over by an unmarried brother, Johannes Neergaard Jessen, a high court solicitor.

Peter Jessen died a short time after his wife in 1938, at the age of just 52. Once again, the future of Silkeborg Manor was in the balance. But, prior to his death, Peter Jessen had taken precautions. Easements guaranteed that no building could take place on the grounds in the future. This had been prompted by the fact that some local entrepreneurs had expressed a desire to buy the estate with a view to demolition and the construction of a block of flats. Changes to the title deeds blocked any such initiatives. So most potential private buyers lost interest, and Silkeborg Municipality stepped in. 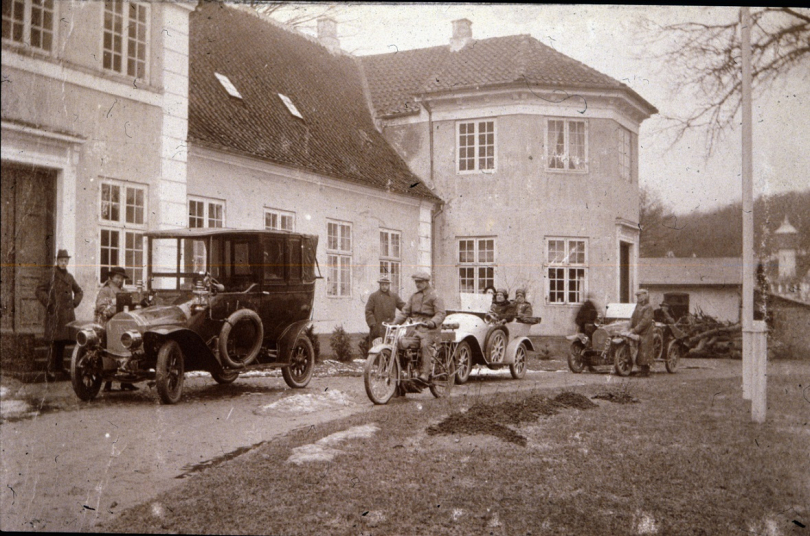 Automobiles in front of Silkeborg in the times of the Family Jessen. Photo: Silkeborg Museum.

Silkeborg Museum
Silkeborg Municipality acquired Silkeborg Manor after Peter Jessen. The plan was to move the town’s day nursery, Dronning Louises Asyl, here in newly furnished and fitted premises. Until 1959, the day nursery’s staff lived on the first floor in the eastern part of the building. The high court solicitor, Neergaard Jessen lived in the west wing.

In 1951, Johannes Neergaard Jessen offered premises to Silkeborg Museum, which for some decades had been ‘homeless’. Thereby, the Museum gained a foothold in the oldest building in town. Johannes Neergaard Jessen died shortly afterwards, and in 1954 Silkeborg Municipality and the Museum Association enabled Silkeborg Museum to open the town’s museum in the entire western part of the main building. The collections included, for example: the mummified Tollund Man; ancient and peasant objects; Michael Drewsen’s furniture; and paintings by the well-known Danish painter Asger Jorn.

Dronning Louises Asyl and Silkeborg Museum shared the building until 1975, when the day nursery moved out, and the Museum was able to take over the whole of the old main building.

Silkeborg Manor is still located in Silkeborg. The main building and the last-remaining fragment of the farm buildings create a historic setting for Silkeborg Museum. As physical testimony to the strange history of a manor, 250 years after its creation, Silkeborg Manor is now located right in the centre of the town of Silkeborg. 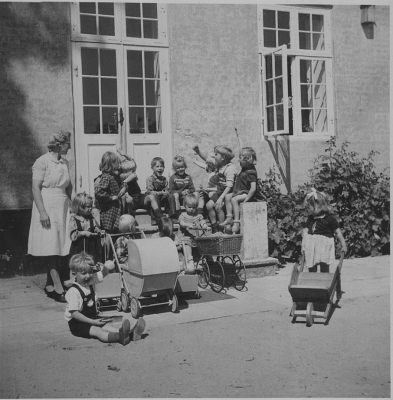 When Silkeborg Municipality took over around 1938, the city kindergarten moved into the former manor house. Photo: Silkeborg Museum.

The Brocks and Scheels of Gammel Estrup
Fussingø. Landed Estates, Enlightenment and Agrarian Reforms
Clausholm. The Judicial System and Estates
Brejninggaard. An Oasis in the Moorland Desert
Hald Castle 1536-1662
Herningsholm. The Manor on the Moors
Kabbel. The Wandborg Family at Kabbel in the 18th Century
Kalø. A Country House for Leisure and Recreation
Rosenholm. The Aristocracy after the Reformation
Kjeldgaard. Lord of the Manor
Sostrup. Magnificence and High-Status Lifestyle in the Country House
Nørre Vosborg. West Jutland's Manor
Lønborggaard. The Survivor
Five Manors Around Odder