The Aristocracy after the Reformation. The Rosenkrantzes of Rosenholm

The Reformation in 1536 affected not only society and religion, but also the Danish nobility. The aristocracy in particular became richer and more powerful at the expense of the Church. This was also a period of change, in which the nobility could no longer legitimise their political and economic power on a military basis alone. Now, instead, they were compelled to acquire education and knowledge in order to justify their elevated social position. The Rosencrantzes of Rosenholm are a good example not only of how the nobility adapted to the new world view, which the Reformation introduced to the Danish realm, but also of how the family attempted to change and shape this world view. 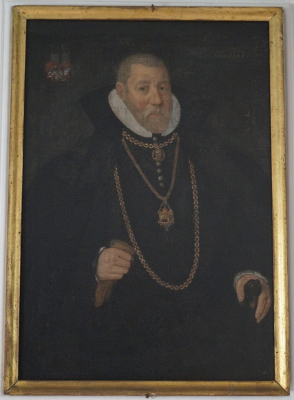 Christian 3. (1503-1559) While still a duke, Christian 3. had attended Martin Luther’s defense of the Reformation at Worms in 1521. After that, the future King of Denmark had become a strong supporter of Lutheranism and gave economic and political support to Luther and his Family in Wittenberg. From Trap Denmark.

The Rosencrantzes and the Reformation
The Rosencrantzes can be traced all the way back to the 14th century. They originated from the peninsula of Djursland, where the manors of Hevringholm and Bjørnholm (now Høgholm) were the family’s original main residences. Bjørnholm was the seat of the eternal bachelor, Christoffer Nielsen Rosenkrantz (d. 1561), who had sworn never to marry. Christoffer, Catholic and with a religious education, had probably set his sights on an ecclesiastical office, but the Reformation of 1536 and the introduction of Lutheranism put an abrupt stop to that career trajectory. It would seem that Christoffer was very Catholic-minded. Following the death of King Frederick I, when the State Council (a combination of the country’s government, parliament and supreme court) had to select a new king, Christoffer supported the pro-Catholic majority.

Christoffer played a major role on behalf of that Catholic majority. The most obvious choice of king was the deceased king’s eldest son, Duke Christian (1503-1559). However, the Catholic majority in the State Council voted against Christian, because he had converted his duchy to Lutheranism during the 1520s. Their choice of heir to the Danish throne was Christian’s younger brother, Duke Hans (1521-1580), who was a mere 12 years old. This would allow the Catholic party to raise Hans as a Catholic. This is where Christoffer Rosenkrantz came into the picture. He was to be responsible for Hans’s Catholic upbringing. However, this plan was never fulfilled. In 1536 Duke Christian became King Christian III, Denmark was reformed, and Hans took over the Duchy of Schleswig after his elder brother.

A new situation. The Rosencrantzes after the Reformation in 1536
When the Reformation was formally introduced in 1536, the Danish aristocracy were faced with a new situation. Whereas, prior to the Reformation, many of the aristocracy had relied on Catholicism, now they shifted their stance and supported Lutheranism. No doubt, there were many reasons for this. After 1536 there was no legal alternative to Lutheranism. In addition, following the Reformation, together with the King, the nobility gained a monopoly in political power (previously, power had been shared between the king, the aristocracy and the Church). Last but not least, the aristocracy in particular experienced economic progress during the reign of Christian III. The nobility was educated in Lutheran theology, converted their local parish churches to make them look Lutheran, and supported scholars and other students who were studying to become Lutheran clergymen.

The Rosencrantzes of Rosenholm Manor are excellent examples of this development. Jørgen Rosenkrantz (1523-1596), who in 1559 embarked upon the construction of Rosenholm, had studied under the instigator of the Reformation, the professor of theology Martin Luther (1483-1546). As the guardian of the then underage King Christian IV’s (1577-1648) regency, Rosenkrantz was responsible for stabilising the new Christian faith.

Jørgen’s son, Holger Rosenkrantz (‘The Scholar’) (1574-1642) followed in his father’s religious footsteps. He transformed Rosenholm into a centre of theological learning, where the promising sons of the aristocracy and middle classes could come to study theology, while he himself wrote a series of essays on Christian faith. He also built up a world-class theological library, which at the time was famous throughout most of Europe.

The Rosenkrantzes of Rosenholm represent an excellent example of the change encountered by the Danish aristocracy after 1536. Following the Reformation, after having been one of the major advocates of Catholic Christianity, they changed their stance to become the champions and protectors of the new faith.

The famous painting by Ferdinand Pauwels from 1872 showing the scene when Martin Luther posted his 95 theses at the castle church in Wittenberg on October 31, 1517. The event has since been considered the beginning of the reformation and has been duly celebrated every hundred years. Ferdinand Pauwel: Luther’s Thesenanschlag, 1872 (Martin Luther Hamre) From: http://www.the-athenaeum.org

The Reformation and Denmark
In 1517, the German monk-cum-professor, Martin Luther (1483-1546) had allegedly nailed his 95 anti-papal theses to the door of the church in the small German town of Wittenberg. The consequences were far-reaching for Luther, Germany and Denmark. His theses added fuel to an already smouldering fire, involving reform of the Christian faith and a break with the Roman Catholic church’s power in society. The incident was also known as the Reformation (= improvement or rehabilitation) even at that time, and the movement evolved in many different directions.

Denmark was reformed according to the Lutheran faith in 1536. This happened after a bloody civil war in the mid-1930s known as the ‘Count’s Feud’. The introduction of Lutheranism led to major upheavals in the country. Most significant of all was the weakening of the power of the Church. The king seized all episcopal  and monastery/convent land (in the Middle Ages the Church owned about 40% of all land). These vast possessions also benefited the aristocracy, because the land was then distribute among, and managed by (loyal) noblemen as royally appointed vassals.

The cultural and symbolic power of the aristocratic State Council members was legitimised by Martin Luther’s widely propagated the Doctrine of the Three Orders. Luther divided society into three units or ranks: the Family (household), the Church (education) and the State (government). The nobility belonged to the last rank and could thereby legitimise their power religiously over the other social groups (peasants and the middle classes). So the Reformation signified a reinforcement of the nobility’s power in society, at least as long as the nobility remained on good terms with the king.

The Brocks and Scheels of Gammel Estrup
Fussingø. Landed Estates, Enlightenment and Agrarian Reforms
Clausholm. The Judicial System and Estates
Brejninggaard. An Oasis in the Moorland Desert
Hald Castle 1536-1662
Herningsholm. The Manor on the Moors
Kabbel. The Wandborg Family at Kabbel in the 18th Century
Kalø. A Country House for Leisure and Recreation
Kjeldgaard. Lord of the Manor - and the Life of the Peasants
Silkeborg Manor
Sostrup. Magnificence and High-Status Lifestyle in the Country House
Nørre Vosborg. West Jutland's Manor
Lønborggaard. The Survivor
Five Manors Around Odder